I have two stories about command buttons.

Quite a few years ago, a team member walked me through a new dialog box. He entered some data, and then unintentionally clicked the Cancel button. He made this error twice in a row, thus losing his changes twice in a row. I pointed out that the OK and Cancel buttons were in the wrong order. The developer switched the buttons to the Windows-standard layout (below, right), and the user-performance problem was solved.

A few years later, on a different project, not only were the buttons in non-standard order, they used non-standard wording and they used coloured icons. My request to follow the Windows standard was met only half-way and then sent for Beta testing before I saw it again. The buttons were now in the correct order, but the button names were changed, and the names and icons were still non-standard. Beta testers loudly protested the change. (Beta testers are often expert users, and experts abhor any change that slows them down.) At the time, the company was only a few steps up the Neilsen Corporate Usability Maturity model, so instead of completing the change to Windows-standard OK and Cancel buttons, the buttons were rolled back, to appease the protesting Beta users. I found out too late to retest with Windows-standard buttons, so there was no data to convince the developers. For me, it was an opportunity to learn from failure. 🙂 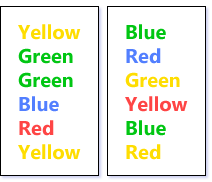 Why is non-standard so hard?

Try this Stroop test (right). Ignore the words. Instead, identify the colours, out loud. No doubt, the second panel went slower and took more effort.

Just as mismatches between text and colour slow your Stroop-test performance, mismatches between standard and non-standard OK and Cancel buttons slow user performance. Our Beta users clicked the wrong buttons—a huge waste of their time—because the new solution didn’t follow any standard. The Beta testers were right to protest, but wrong in their demand to revert to the original non-standard state. (See: Customers can’t do your job.)

Users learn GUI patterns—patterns that are widely reinforced by user experience—and users expect GUI to behave predictably, so it’s unwise to deviate radically from the standards, unless there are product-management reasons to do so.

I’ll write more about following standards versus designing something new in the coming few posts.

P.S. It looks like Jakob Nielsen got here before me.