Software development that uses a waterfall method is likely to deliver the wrong thing, too late. The intent of the Agile method is to deliver working software sooner, so the intended users—our clients and their customers—can provide feedback that steers us to deliver the right thing.

There’s a tension between delivering on time and delivering the right thing. In fact, the rush for on-time delivery can result in the wrong thing—an unusable product. There are ways to prevent this. User research can help.

When squeezed by deadlines, Agile teams may sacrifice time to make the product more usable, despite the first of the Agile Manifesto’s principles:

Data about what’s usable generally comes from testing with users. Much of that testing can’t take place until after each piece, parcelled into Agile stories, is done. Development teams—consisting of analysts, developers, quality-assurance testers, usability researchers, interface designers and comtent designers—may consider an Agile story to be completed despite the lack of feedback from the intended customers about its usability (and other measures of value).

Ways to build usability into your Agile process

It’s possible to balance the tension between building the right product and delivering a product on time. Here are some ideas—some of which might seem radical.

The above tips are in line with the Agile Manifesto—when its principles are well balanced. It’s easy for a team to excel at some of the principles, and forget the others. For example, development teams focus on speed, citing these two principles:

Let’s look at each of these principles in more detail.

Short sprints provide feedback sooner. For example, management gets frequent data with which to predict when the software will be built and ready for release. This simplified burn-down chart shows one approach: 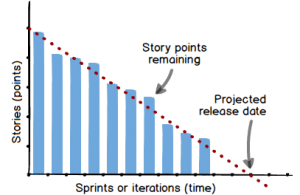 Short sprints also allow teams to get customer feedback sooner, so the team finds out sooner if they’re building the wrong thing. In fact, the Agile Manifesto assumes that some of the feedback will result in changes, hence this principle:

For management, re-opening a previously completed Agile story in response to a usability defect makes its projections uncertain. Fortunately, it’s possible to adapt the reporting tools to allow for defects and feedback. The modified burn-down chart, above, shows one approach.

The Agile Manifesto declares that working software is the primary measure of progress, but it’s not the only measure. Another measure of progress is feedback—such as usability research that provides quantitative performance data and qualitative observations and ratings of customer experience.

Summative testing of an as-built feature occurs after developers write the code for the feature. This testing results in the usability defects shown in orange, on the above burn-down chart.

Formative testing of an unbuilt feature occurs before developers write code the feature. This testing is often done with prototypes, especially when the team wants to test an interaction design, a workflow, or even the mental model. Developers may need to help build a testable, working prototype.