Researchers have been tracking the use of phones by drivers for almost a decade. We know that phones reduce driver performance, and that one fifth of motor-vehicle accidents involve cell phone use. We know that hands-free phones don’t help. Heavy traffic and stop-and-go traffic compound the risk, because driving in this type of traffic requires more attention. The type of phone use is also relevant. In Japan, dialling and talking while driving was involved in about one sixth of accidents, whereas attempting to locate the phone when it chimes to announce an incoming text message or voicemail was involved in almost half of phone-involved accidents. In addition, laws restricting phone use do little—at this stage—to reduce actual cell-phone use. This research applies not only to you and me, but also to professional drivers who deliver services to you and me.

I was in a taxi, earlier this week. Traffic was heavy, so when the driver’s phone rang, I said: “Please don’t answer unless you pull over, first.” The driver decided not to stop and not to answer the phone call. Instead, he attempted to read the incoming caller’s phone number, which involved taking his eyes of the road as he repeatedly glanced at the phone. At the next red light, my taxi driver announced: “I’m just going to use my phone quickly.” He made a call and was still talking when the traffic signal turned green and we resumed driving. After ending that call, he answered another incoming call.

In the back seat of the taxi, I decided to grin and bear it, because a phone offers a driver more immediate rewards than most fare-paying passengers do.

From time to time, all people—not only taxi drivers—find it challenging to ignore their phones. Mobile phones provide instant emotional rewards when you attend to them: your reward is interaction with your family, friends, colleagues, and business associates. Conversations and messages offer the phone user entertainment, drama, tension, (information about) money, connection, belonging—all manner of emotional reward.

If you see why phones are so rewarding to use, then you understand (part of) the popularity of social-networking sites, as well. Like phones, social-networking sites offer interaction with friends, family, and colleagues, regardless of whether these sites are accessed on traditional computers or mobile and wireless devices.

With a fifth of traffic accidents related to phone use, it’s worth exploring how to reduce the wrong kind of phone use by drivers.

If our goal is safety, and we assume that safety is a measurable attribute of service design, then what would it take to design safer services by professional drivers? Here are a few ideas.

Change beliefs and opinions. My taxi driver believes he’s an expert driver and volunteered that he’s never had an accident in a decade of driving. In another decade, ad campaigns similar to those against drunk driving might change his mind. For a more immediate effect, driving simulators could help professional drivers learn how phone use affects their driving performance.

Standards and pressure. Someone recently told me that they limit smart-phone use in business meetings with one simple rule that everyone agrees to in advance: You can check your phone messages and email if you read the message out loud, for everyone in the room to hear. When it comes to phone use in vehicles, could the phone report to peers and employers when it is used while driving? Peers can apply pressure and employers can set standards with pay-related and job-related consequences. In Canada and the USA, some employers already do this.

Technical solutions. Phone networks know when a phone is moving in traffic, from cell to cell. In addition, smart phones have GPS—so they know when they’re moving on the road. Phone companies could offer a soft-lock feature that silences the chimes and rings for incoming messages, texts, and calls, and that restricts outbound calls to emergency services while the vehicle is moving. For drivers in the delivery sector and service sector, a not-while-driving soft lock could reduce lawsuit payouts in case of injuries in traffic.

These are just a few ideas to kick-start what I believe needs to be a public discussion. What ways can you think of to redesign or influence phone usage by drivers?

Is it a usability experiment? Are they testing the theory that a baby in a bucket won’t fall over as easily as a baby in a bath? 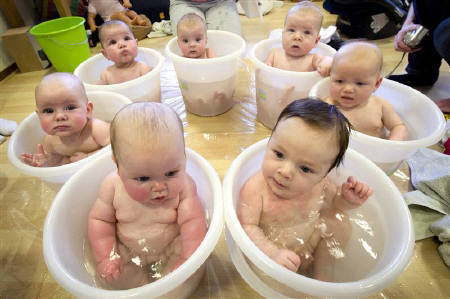 Actually, it’s a photo that accompanies a news story about babies in IJmuiden, The Netherlands, whose parents were learning baby massage. The warm bath in advance is supposed to make them feel like when they were in the uterus.