Peter Merholz of Adaptive Path explained his view that customer experience is an investment, not a cost, in an article this week on Harvard Business Publishing’s site.

I adapted one of the “linking elephants” illustrations in the Merholz article by adding another row of boxes and text to illustrate what Merholz says: it is design that motivates people to modify their behaviour. I also added an ROI or return-on-investment calculation. 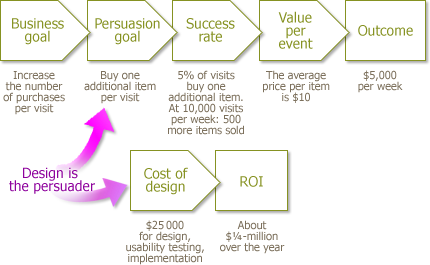 Design makes the difference. By “design” I don’t just mean how it looks; I’m including the mental model (how the site visitors or users think the site meets their needs), the workflow and interaction (how users complete the task), the experience (including how users feel about using the site), and the prototyping and formative usability testing needed to validate the proposed changes. Your business case needs to include the cost of all this design work.

Making a business case can be intimidating, but the above illustration shows that it’s conceptually easy. In your business case, you predict the benefit to the company of a project, using the best estimates you can come up with. What would be your organisation’s goal? What behavioural change on the part of site visitors moves you toward that goal? What is that behaviour worth, either in revenue or in reduced costs? How many site visits do you get per week? What’s the potential impact to your organization of redesigning part of your site? After you implement the new design, you use summative testing and comparisons to get feedback on the assumptions of your business case.

I recommend reading Merholz’ article on the Harvard Business Publishing.