Earlier this decade, the big players in software adopted modernist design for their user interfaces. With this redesign, digital came of age, with a look and feel that’s no longer bound by last century’s conventions or bound by the inexperience of those new to computing. Modernist user interfaces focus people on their current task, supports fast-paced use, and embraces the fact that the interfaces are digital.

You’ve seen and used modernist interfaces, on your Apple phones and tablets, in Google products, and in Microsoft Office and Microsoft Windows. But let me explain what modernism is and what it isn’t.

Blindly applying those two guidelines without understanding the underlying principles can lead to puzzling and inconsistent experiences. In some cases—including in products by the big players—fewer items and less visual detail on screen has resulted in the removal or omission of the necessary cues that separate content from controls, the cues that allow people to learn and use the software effectively. In other words, overzealous application of the two oversimplified design guidelines has made some modernist products less usable.

Let’s examine each of the purported benefits listed above.

Fewer elements on the screen

Modernism calls for a simpler interface. With fewer choices on the screen at any given time, people can work faster and people are more likely to choose what they need—provided the right elements are present at the right time. To get this right requires an excellent understanding of the tasks customers need to do, and when. To identify the what and when, research on customers before the design stage is key, and testing with customers during the design stage is key. Simply putting less on the screen without testing how the interface performs in the hands of customers is a gamble.

Here’s an example. In this phone app, three icons provide access to three functions. Some modernist apps no longer provide labels for common icons—the labels are “unnecessary” detail—but what if you aren’t sure what an icon means in the current context?

To address this, some modernist designs provide the labels on demand. For example, the phone app, below, provides a fourth icon that, when tapped, reveals the labels.

The ellipsis (the “…” symbol) is a cue to users that “there’s more to see.” This cue is necessary—so it hasn’t been stripped away in this modernist design. This is also an example of an interaction that’s natively digital. It’s not possible in the physical world to show and hide content because paper is static, not interactive.

Visually simpler and flatter elements on the screen

Modernism calls for an interface that is stripped of distracting ornamentation. With less visual noise on the screen, the interface is less demanding and—again—easier and faster to use. Simply removing extra lines, extra colours, and extra words without testing how the interface performs in the hands of users is a gamble. Here are a half-dozen examples.

In the illustration, example 1 shows a button that clearly has affordance. Affordance means that on screen the button looks like a 3D object that we could press—just as we can press a 3D button in the real world. The button’s gradient fill and shadow make it appear 3D. Most people know this 3D appearance from earlier versions of Windows and from the first editions of iPhone.

In example 2, the 3D appearance and shadow are removed. Most people first noticed this flattened look for buttons in Google Chrome and for tiles in Windows 8. With most of the affordances stripped away, in some contexts people have trouble recognising that these boxes are buttons to click or tap, or an object to drag or swipe.

It is possible to strip away the ornamentation without going too far. In example 2, the Search button (far right) has a slight gradient, slightly rounded corners, and a slight shadow on roll-over, all of which subtly help identify this element as a button. This button is from Google Gmail’s search box.

Example 3 shows “buttons” that have the background rectangle removed, leaving only text. For many years, blue text —especially when underlined—was used to identify a hyperlink. Most people know this link appearance from the Internet’s first two decades.

In example 4, the colour and underline are also removed. You may have noticed these plain, modernist links in Samsung’s Email app for phones. With the colour stripped away from the links, in some contexts people have trouble recognising which text is a link to click, tap, or swipe. In Samsung’s email app, the entire lozenge—title and summary text—acts as a link. 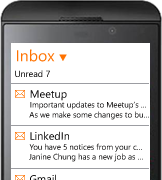 It is possible to strip away the background colour and text decoration and still provide cues that people can interact with this text. For example, in the illustration, below, the row of links extends off the right edge of the screen to suggest they can be swiped. Extending off the screen is easy to do, for example by enlarging the text. 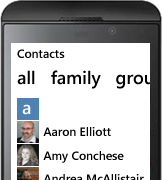 Example 5 shows two icons that have lots of realistic detail. This resemblance to physical objects is called skeuomorphism. For many years, skeuomorphism increased as improvements to computer screens allowed more colour, better display resolution, and thus more realism. During this time, each icon typically also had a label to help make the icon’s meaning clear.

In example 6, the skeuomorphism and labels have disappeared, or are hidden. Most people first noticed the flattened, modernist icons in Google apps and in Microsoft Office 2013 and later. In some contexts, people don’t recognise the icons without their labels, and either don’t know how to or don’t think to reveal the labels.

On early iPhones and iPads, some apps would use skeuomorphic detail to cue people about how an app functioned. For example, an image of spiral-coil binding (below, left) signals that there may be more content on another page, and page-curl transitions that mimic a turning page reinforce this as the user navigates from screen to screen. In contrast, the more modernist design (below right) uses a cue that’s only possible in the digital world. The screen uses content peeking (look closely at the right edge) to signal that there is more content on another page.

Some design challenges, as the content-peeking example shows, have excellent solutions that comply with modernist design principles: simple, less on the screen, and natively digital. Other design challenges have yet to be solved.

However, the current design fails because there is nothing in the interface to suggest that these functional changes will occur, so there’s no reason to rotate the screen in order to discover them. This design challenge calls for a solution—a visible button or icon or other explicit path—that clearly toggles through the calculator’s three states, for example by forcing the screen orientation to change for at least a few seconds, and temporarily ignoring the device’s current physical orientation, or perhaps locking it in place.

To be “usable” requires not only that people can successfully use software tools to perform their tasks, but also that they can locate and recognise those tools. This used to be easier to accomplish when there were fewer platforms.

The big players are changing the way user interfaces look and feel by applying modernist design to make the truly digital. At the same time, software is changing because the way people use it, where they use it, and with whom they use it is changing. As development teams continue to provide possibilities, they need to work with interface designers, usability analysts, and members of their target audience—the users or customers. Together, we can ensure the new interactions and simplified interfaces we design and build will tell people how the interface works and both help and remind people to find the functions and content they need. It’s not about making things flat and removing clutter; it’s about getting the interface right while applying modernist principles so people can use the product fully.

Postscript
I came across a video, titled Everything is a remix, that explains the “why” of modernism.

3 Replies to “Modernist design: Beyond flat and simple”