When designing the user experience of software, UX- and Development teams often focus on how the user interface supports user performance, because that’s within their locus of control. Once the product is in the wild, environmental factors may reduce user performance despite the team’s best product-design efforts. But I believe it’s possible for a UX team to also influence the environment in which their products get used. Consider two of these:

Users of all ages and genders are more effective at performing search tasks and comparison tasks (Tao Ni et al, 2006), and more effective at spatial tasks, when they use large displays. Mary Czerwinski et al, reported a 12% significant performance benefit (2003). However, when given a choice, people don’t want very large displays on their office desks; they opt for medium-sized displays instead. One study showed that older users least prefer large displays but stand to gain the most performance benefit. (This study was done before multi-monitor arrangements became common.)

A 12% improvement in performance suggests that 7 people with large displays could theoretically do the job of 8 people with medium displays. How many large displays could your office buy for one person’s salary every year? For business-to-business sales and especially for enterprise-wide software implementations, there’s a place for sales teams and proposal writers to mention the business case for larger displays.

Call it what you want—innovation, thinking outside the box, providing solutions—your UX-Design team can work with the Sales and Service/Implementation teams to ensure customers get solutions that include better hardware choices.

A half-decade of research by Dr Sabine Schlittmeier has expanded on what common sense told us: it’s harder to concentrate when others are chatting in the background. Schlittmeier found that when background speech is louder and more intelligible, it negatively affects verbal short-term memory, sustained attention, and verbal-logical reasoning. When I asked her what techniques have been shown successful, Schlittmeier told me that a masking sound, such as music or talk radio, is not objectively effective because the higher level of background sound has detrimental cognitive effects, but subjectively people feel this is effective. She added that there’s a measurable benefit to:

I suppose working remotely—from a quiet home—is a variation of these solutions.

I also asked, “What one thing, if handled differently, would most improve the way people experience noise at work?” Schlittmeier said it’s not about one thing. She recommended attacking problem sound from all dimensions at once: loudness, frequency characteristics, sound production, transmission, and so on.

The way I read the research results, reducing background speech to a soft, unintelligible noise could result in a 10% to 25% decrease in memory errors and logic errors, and an 18% increase in attention span. What Schlittmeier hasn’t provided is data about overall productivity improvement, without which it’s harder to make a business case for spending on office-noise abatement.

But there are other ways to mitigate the background office noise that affects your users, and you may be able to influence how your customers approach that problem. 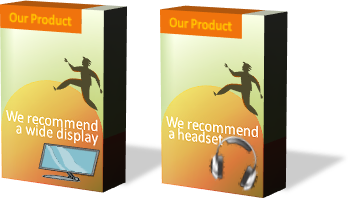 Again: call it what you want—innovation, thinking outside the box, providing solutions—your UX-Design team can work with the Marketing team to influence the environment through traditional marketing. Imagine a business-to-consumer product that is designed to work even better with a (noise-cancelling) headset—and which is depicted in use with headsets in the marketing messages and on the packaging.