Here are three techniques for eliciting more feedback on your designs:

To iterate and improve the design, you need honest feedback.  Let’s look at how and why each of these techniques might work.

Showing alternative designs signals that the design process isn’t finished. If you engage in generative design, you’ll have several designs to show to users. Users are apparently reluctant to critique a completed design, so a clear signal that the process is not yet finished encourages users to voice their views, but only somewhat.

The design is the same, but it feels more difficult to criticise the one on the right.

Asking users to sketch their feedback turns out to be the single most important factor in eliciting feedback. It’s not known why, because there hasn’t been sufficient published research, but I hypothesize that it’s because this is the most indirect form of criticism.

Where’s the evidence for sketched feedback?

The evidence is unpublished and anecdotal. The problem with unpublished data is that you must be in the right place at the right time to get it, as I was during the UPA 2007 annual conference when Bill Buxton asked the room for a show of hands. Out of about 1000 attendees, several dozen said they had received more and better design-related feedback by asking users to sketch than by eliciting verbal feedback.

My own experience agrees with this. In Perth, Australia, I took sketches from a Five Sketches™ design session to a customer site for feedback. I also brought blank paper and pens, and asked for sketches of better ideas.

Not surprisingly, the best approach is to combine all three techniques: show users several low-fidelity designs, and then ask them to sketch ways to make the designs better.

There’s been a loss of usability for people who type text.

By comparison, if Word stops responding, it will (try to) offer me my unsaved changes when I reopen the document.

When my actions in a browser fail, imagine a message such as this:

This hints at just one possible solution. In the spirit of Five Sketches™, I bet you can come up with at least five more ways to support users after they’ve lost the work they typed in a browser.

The strength of sketching is that it’s a fast way to capture ideas. 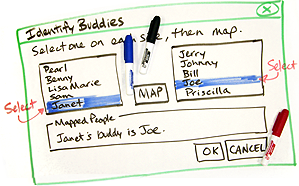 Since a low-fidelity sketch is fast—pen on paper, as shown—it’s also low cost. And low cost means it’s relatively disposable if it turns out you can’t use that idea.

If you don’t like my first 5 ideas, that’s OK. I can have more ideas, easily and at low cost. And so can you.

A variation on this theme: iteration is also painless. With relatively little invested in a sketch, modifying an idea costs marginally more.

The payoff is that you can quickly saturate the problem space with ideas, before you analyse them. This is a key part of why Five Sketches™ works so well for development teams who are in a hurry to start programming.

It’s important to keep sketches cheap. Here’s a video of a cool sketching tool that, if used as a design aid, would greatly increase the project risk. That’s because this cool tool is expensive to install, expensive to learn (it requires training) and expensive to use (it allows only 1 user at a time). All this will reduce the number of sketches in the problem space—and it’s risky to design without considering all options.

Thanks to Karen for finding and sharing this cool video.